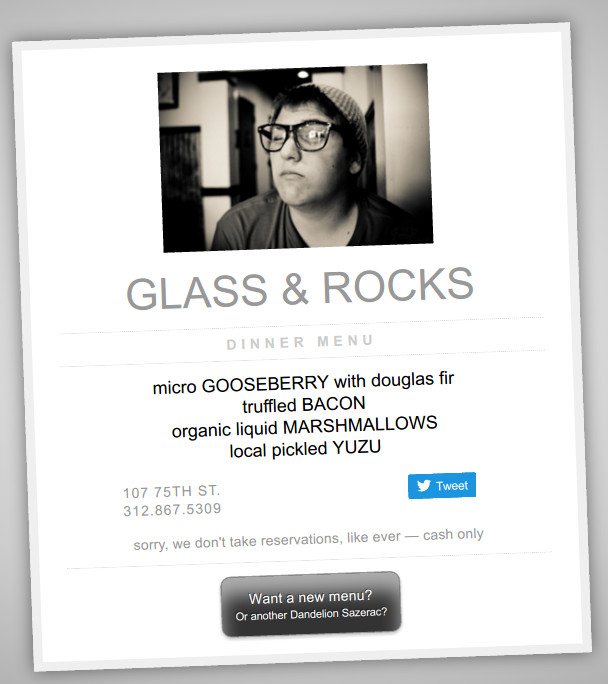 Last month was the two year anniversary of the website Hipsteraunt, which I built with my friend Lance Arthur. He did the design, I did the random menu generation. It is a quirky bit of AI and NLP under-the-hood, so a user gets menus featuring free-range suspended chicken feet, truffled shisito pepper with achiote, and marshmallow crudo, at a place with an ampersand in its name. The inspiration had been a particular dinner out in San Francisco, at an immensely overrated restaurant. But it could have been Brooklyn or the West Loop. I am a quant & machine learning researcher by happy vocation, but also a chef by training. (Le Cordon Bleu with honors, thank you.) So the term “foodie” has always struck me as what privileged folks call themselves when they like to eat fancy food, but would not be caught dead hanging out with a line cook.

Hipsteraunt remains a tender satire of a certain sort of fetishized dining out. It was meant to be an acerbic call to check-your-privilege, together with a reminder that nothing in food is new. No combination of ingredients or flavors has not been tried a thousand times before. Even offal and the Asian flavors everyone loves to exoticize. (Awkward…) We lived through the fusion cuisine of the 198

0s, remember? In hindsight, it might have cut a bit too close to the bone. The site garnered plenty of attention, but less heady pokes like the fake Guy Fieri menu and the brilliant Jacques le Merde have been far more successful. An annoying bug with making menu URLs permanent snagged things up the first couple weeks, too. Nonetheless on Hipsteraunt’s second birthday, I celebrate by raising an artisanal cocktail (a lemongrass aviation, perhaps) and toasting the addition of a few new ingredients: Keep an eye out for those trendy signifiers of faux-edgy cuisine we all love, like burrata and purslane, za’atar and togarashi. Goodbye ginger, goodbye almond milk. But it looks like bacon is still there.